Rober Graves’ historical fiction novels I, Claudius and Claudius the God was adapted by Jack Pulman into a Herbet Wise-directed BBC Television series consisting of tvelve 50+ minute long episodes that aired on BBC2 between 20 September and 6 December, 1976. The first night’s broadcast consisted of two episodes back-to-back, while the remaining eleven broadcast nights showed only one episode. 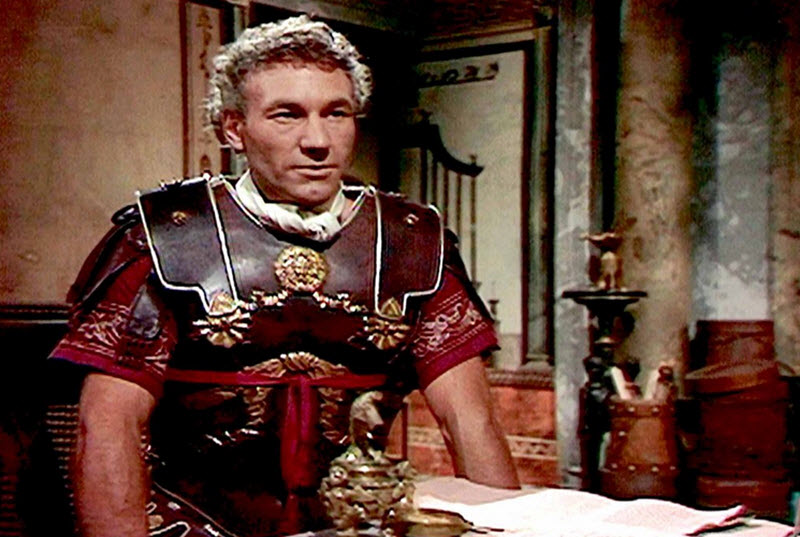 Just like the novels, the TV-series covers the story of the early Roman Empire, told from the perspective of Emperor Claudius (here played by Derek Jacobi) who functions as the narrator.

For many actors that would eventually go on to become household names, I Claudius provided important initial exposure to large audiences in the UK and USA.

David Wulstan and the Clerkes of Oxenford ensemble provided the music for most episodes.

The title music was composed by the English composer Wilfred Josephs.

When the first two episodes had been aired in the United Kingdom (on the same night), the series received negative reviews from the critics. The Guardian even went as far as saying that there “(…) should be a society for the prevention of cruelty to actors”.

The series did however go on to become a huge success with the public, and eventually, quite a few critics also began praising it, and it was awarded with four BAFTA Awards. During it’s original airing in the fall of 1976, the show had an average audiecne of 2.5 million viewers per episode (based on rating surveys).

In 2000, the British Film Institue had I, Claudius on spot #12 on their list “100 Greatest British Television Programmes”. The list had been created by letting industry professionals vote.

The TV-series was broadcast by PBS in the United States as a part of their Masterpiece Theatre series. It was favorably received by the critics and production designer Tim Harvey received a 1978 Emmy Award in the category Outstanding Art Direction.

The TV-series I, Claudius has withstood the test of time. Sure, details such as the wigs and the make-up can look a bit humdrum today, but hardly anyone is questioning the time-enduring quality of the screenplay and the actors performances.

In 2007, Time magazine included it in its list 100 Best TV Shows of All-TIME. That same year, it placed #9 on BBC America’s poll of the 10 best British Dramas of all time.

In 2016, it was included in Daily Telegraph’s list of 11 groundbreaking British TV moments.

The creators behind the 1980’s soup opera Dynasty acknowledged that they aimed to make a modern-day version of I, Claudius. Other examples of TV-shows that have been likened to I, Claudius for their focus on powerlust and devious plots are The Sopranos, Game of Thrones, and House of Cards. In The Sopranos, lead caracther Tony Soprano even has a scheming mother named Livia.

Episode 8 (Zeus, by Jove!) originally contained a graphic scene where Caligula cuts a foetus from Drusilla’s uterus. The scene was re-edited several times to become less shocking for the audience, but eventually it was decidedto remove the shot of the foetus all together and let the episode end with Claudius watching what’s happening with shock and horror, without the camera acutally showing the audience what’s happening to Drusilla, leaving the grusesome event to the imagination of the viewer.

The now delated foetus shot was however included in the original showing of the episode, and in one later showing as well. Today, BBC has no surviving copy of the removed foetus shot.

The TV-series has been released on both VHS and DVD. Most versions include not just the TV-series but also the 1965 BBC documentary “The Epic That Never Was” about the aborted attempt to turn the I, Claudius novel into a film in the 1930s, with Josef von Sternberg as director and Alexander Korda as producer.

In 2002, a DVD with the I,Claudius TV-series was released in the UK feauturing a documentary about the making of the TV-series, plus some deleted or alternative scenes. The dccumentary is titled I, Claudius – a Television Epic.

In 2012, a 35th Anniversary Edition DVD was relesead, containing 12 episodes in their original form + one cut episode (“Zeus, by Jove!”). The “Zeus, by Jove!” episode is included in its cut version since the originally broadcast version (where Drusilla’s foetus is shown) had been destroyed by the BBC. All the episodes have SDH subtitles. The box contains an extra disc with bonus features.