Several Roman-era authors have portrayed Claudius as a man dominated and manipulated by his wives and other women in his life. The actual truth of the matter very difficult to know, since each writer had their own reasons for depicting Claudius in one way or the other.

What we do know is that Claudius was married four times, and that there were also two betrothals earlier in this life that did not result in marriage. 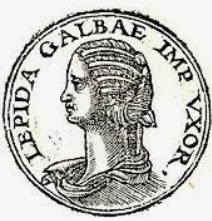 Claudius first betrothal was to his distant cousin Aemilia Lepida (b. 5 BC). She was the daughter of Julia the Younger, who in turn was the granddaughter of Emperor Augustus.

When Aemilia’s parents fell out of favor with Augustus, the emperor broke off the betrothal between her and Claudius in 8 AD.

Aemelia instead married Marcus Junius Silanus Torquatus. One of their children, Lucius Junius Silanus Torquatus, would eventually become engaged to Claudius’ daughter Octavia, born to Claudius’ third wife Valeria Messalina. They were never married, however, because Agrippina the Younger (who would eventually become Claudius’ fourth wife) spread a rumor claiming that Lucius had committed incest with his sister, and the rumor led to Lucius being expelled from the Senate. He committed suicide on the day that Claudius and Agrippina got married. 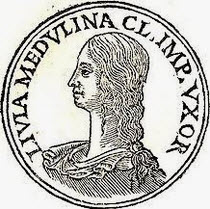 Claudius second betrothal was to Livia Medullina. He got very close to marrying her, but she suddenly fell ill on their wedding day and she died before being married. She was around 16 years old at the time of her death in the year 9 or 10 AD.

Livia was the daughter of M. Furius Camillus, who was a consul of 8 AD and a close friend of Emperor Tiberius, who is believed to have pushed for the betrothal between Livia and Claudius to help his friend. 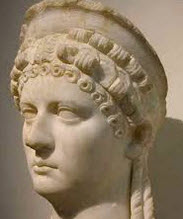 Claudius married his first wife, Plautia Urgulanilla, at some time around the year 9 AD, when he was 18 years old.

Belonging to an Etruscan family, she was the daughter of General Silvanus, who had been consul for the year 2 BC. Her grandmother had been a close friend of Empress Livia Drusilla.

With Plautia Urgulanilla, Claudius had a son named Claudius Drusus who died of asphyxiation in his early teens, soon after being betrothed to a daughter of Sejanus. (Sejanus was commander of the Praetorian Guard under the Emperor Tiberius.)

Claudius divorced his first wife in 24 AD on grounds of adultery, and – according to Suetonius – Claudius also suspected that she had been involved in the murder of her sister-in-law Apronia.

When Plautia Urgulanilla gave birth five months after the divorce and conspicuously named the child Claudia, her ex-husband repudiated the child and had it laid at Urgulanilla’s doorstep. Claudia was widely known to be the offspring of the freedman Boter. 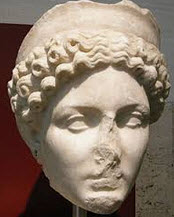 Claudius second wife was Aelia Paetina, who was Sejanus adopted sister. Her biological father was Sextus Aelius Catus, who was a consul of 4 AD.

Claudius and Aelia Paetina were married in 28 AD, and their only child – Claudia Antonia – was born in 30 AD. (Claudia Antonia was executed in 65 or 66, during the reign of Emperor Nero.)

The year after the birth of their daughter, Claudius divorced his second wife after her adoptive brother Sejanus had lost power and been murdered. 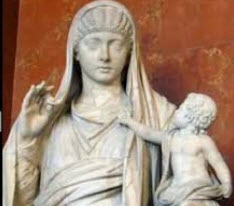 In 38 or early 39, after being divorced from Aelia Paetina for some years, Claudius married Valeria Messalina. She was his first cousin once removed and a great-grandniece of Emperor Augustus. As a second-cousin of Caligula, she was closely allied with Caligula’s circle.

In 48 AD, while Claudius was at Ostia, Valeria Messalina married her lover Gaius Silius in a public ceremony. Sources disagree as to whether or not she had divorced Claudius first, and if the new marriage was part of a plot to usurp the imperial throne. Many sources claim that she had not informed Claudius that she wanted to divorce him. Under Roman law, informing your spouse was a requisite for divorce to take place, so failure to inform Claudius first would have rendered the new marriage null and void.

The result of the whole ordeal was the execution of Valeria Messalina, Silius and many other members of her circle. 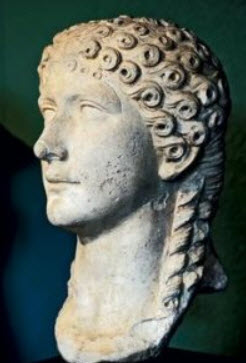 Claudius forth wife was Julia Agrippina, known to us as Agrippina the Younger. Born in 15 AD, she is generally described as one of the most influential women of the Julio-Claudian dynasty.

She was the daughter of the popular general Germanicus, who had been heir apparent to the imperial throne under Tiberius. Through her mother Agrippina the Elder, she was the granddaughter of Emperor Augustus. Caligula was her older brother, and her husband Claudius was also her uncle.

Julia Agrippina and Claudius married in 49 AD. It was her third marriage and his fourth.

By marrying Agrippina, Claudius probably hoped to strengthen his bonds with the powerful Julian family. With her now deceased husband, Gnaeus Domitius Ahenobarbus, Agrippina had the son Lucius, born in 37 AD. (Lucius would later become Emperor Nero.) Claudius knew that as a direct descendant of Emperor Agustus, Lucius would be a great focal point for coupe attempts against himself if the Julian and Claudian branches were not on good terms with each other.

Claudius formally adopted Lucius as his own son in 50 AD. Lucius name was changed to Nero Claudius Caesar Drusus Germanicus, and he was appointed joint heir with the still underage Britannicus. In 53 AD, Nero married Claudius’ daughter Octavia to further solidify the alliance.

Both contemporary and later sources agree that Agrippina schemed in every way possible to deprive her step-son Britannicus of his heritage and isolate him from his father. In 51 AD, she ordered the execution of Britannicus tutor Sosibius since he was opposed to her blatant disregard for Britannicus.

When the 63 year old Claudius died in October 54 AD, many Romans suspected that he had been poisoned by Agrippina. At that time, Claudius had started to pay more attention to Britannicus and prepare him for the throne, which would have given Agrippina reason to get rid of him to secure her own son’s ascent to the throne.

After Claudius death, it was Nero – not Britannicus – that became emperor of the Roman Empire. For the first few months, Nero largely obeyed his mother, but this soon changed and he started making his own decisions – including having a love affair with a woman that his mother disapproved of.

Disappointed, Agrippina began to support Britannicus instead and worked to make him emperor instead of Nero. To get rid of this threat, Nero had Britannicus poisoned on a banquet in February 55 AD.